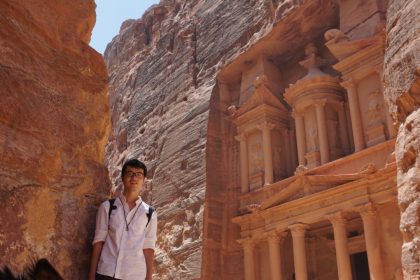 Chunlei is a 21 –year- old Chinese Arabic speaker. After pursuing a BA degree in Arabic language & literature, he started working as a translator in Beijing. We talked to Chunlei about his experience in learning Arabic and his academic success.

Why did you choose to learn Arabic and what attracted you to it?

I think Arabic is one of the most difficult languages in the whole world, and I wanted to challenge myself as a Chinese native speaker. Similarly, Chinese is also regarded as another difficult language in the world. Besides that, so many people in China are learning French, Spanish, German and other languages; meanwhile the Arabic learners are relatively rare, and so I wanted to be unique by learning the Arabic language.

Another reason that made me pursue Arabic studies is that the Arab region is a huge area and can be seen as an emerging market. So from this perspective, I see huge potential in learning Arabic and being one of the rare learners to navigate this huge market.  Arabic is also very useful within international organizations, and is as one of the six official languages in the United Nations.

Which level of Arabic have you reached so far? Are you in beginner, intermediate or advanced level?

I’ve reached an advanced level, since Arabic was my major at university, and I’m happy to say that I can now read Arabic novels, local newspapers and can also comprehend and understand the news on  Arabia channel (قناة العربية) without any problem. As for local dialect, I’m still a beginner and I am intending to learn and master it.

Why do you want to learn the local dialect?

After studying Modern Standard Arabic (MSA), I realized that if I wanted to travel to the Arab region and maybe even one day pursue a career there; I needed to learn and perfect a local Arabic dialect. As you may know, Arabic Natives do not speak (MSA) in their day to day lives or when they speak with one another.  What I know for sure is that I want to interact and learn how to converse with the locals, and the only way to do this is through learning the local dialect.

Have you visited any Arab countries?

I have been to several Arab countries, such as UAE, Qatar, Jordan and Palestine. I also made several Arab friends, and I stay in touch with them on a regular basis through online chatting.

How have you benefited from learning Arabic?

I now do Arabic translation, which is rare in China.  This skill helped me to take part in a conference on Arab and Chinese women, where I took the role of translator and interpreter for a Palestinian minister.  It was a very well- paid job, and I earned 200 USD per day.

Tell us more about your learning experience. Was it easy or difficult? Were there any challenges?

At the beginning, it was a little tough, especially for the pronunciation, this may be even tougher for somebody who is Asian.  After one year of learning and lots and lots of practice, I started speaking it well.  But now, the biggest challenge in front of me is perfecting a local dialect. To be honest, I discovered that it’s almost like learning a whole new language. Fortunately though, my Arabic professors have told me that picking it up is always extremely easy for (MSA) students like me.

Are you happy with your decision to learn Arabic?

Yes, very much so. After all, I now have a great job because of my Arabic skills. In fact, my friends are jealous of me.

Do you speak a local dialect? If so, which one?

Just a little of the Jordanian dialect, because I was in Jordan for one month.

Would you like to practice the Jordanian dialect with native speakers?  How often you can travel to practice?

I would definitely love to. But I think I prefer to learn via internet, since travelling is time -consuming and costly.

In your opinion, what are the general benefits of learning Arabic as opposed to other common languages?

Actually, I am also learning French, since it is also a so- called “common language”, but I think Arabic is a very special skill. You can rely on it as your tool for navigating life. Other common languages, like English and French, are spoken by so many people fluently.  Arabic however, is not and that’s why you are at an advantage if you learn it since Arabic can make you competitive in China, in a market of 1.3 billion people.

Would you advise people to learn Arabic?

Yes, especially if you are interested in the Islamic religion or in Middle East studies or history, or if you are working in the oil industry, Arabic can help you a lot and is worth learning

How do you plan to use Arabic in the future? Are you planning on travelling to Arab countries for work or tourism?

I plan on applying to Chinese companies located in in Arab countries, such as HUAWEI.  This way, I’ll have the opportunity to work there as a translator.