Why I Love The Arabic Language 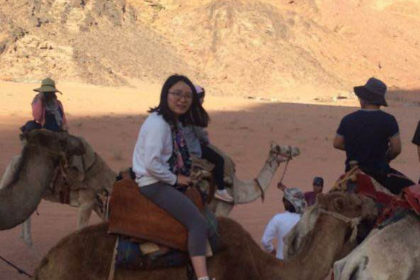 Xuran Wu is 23 years of age and has just completed her MA degree in Islamic & Middle Eastern studies at the Hebrew University of Jerusalem. She is also a fluent Modern Standard Arabic (MSA) speaker. We Chatted with Xuran to learn more about her experience learning Arabic; one of the most commonly spoken languages in the world.

Why did you choose to learn Arabic and what attracted you to learn it?
My experience started when I chose to do my BA degree in Arabic language and literature, because I had a curiosity about this ancient Semitic language. As I started to learn Arabic, I realized that the language is truly enchanting and beautiful. However, even more attractive to me is the culture and history of the Arab people and the Muslims around the world who are using it. I believe that human civilization would not be present as it is today, without the Arabic language or the Arab people.

How long have you been learning Arabic?
I studied Arabic, more specifically, Modern Standard Arabic, for four years at University as my major, during which I went to Jordan to study the Levant /local Jordanian dialect. I also tried to improve my Arabic skills during my Masters studies in Jerusalem.

Which level of Arabic have you reached so far? Are you at a beginner intermediate or advanced level?
I think that with regards to MSA, I have reached the advanced level, more or less. As for the Levant local dialect, I’m at an intermediate level.

What kind of Arabic did you learn? Modern Standard Arabic or local dialect?
I learned both. However, I have not perfected the local dialect yet. It turns out that learning the local dialect is essential if you want to employ your Arabic and master your conversational skills.

Have you travelled to an Arab- speaking country?
I travelled to Palestine and Jordan just to be able to learn the Jordanian dialect, which is considered a Levant or centralized dialect. I chose Jordan because the dialect is close to MSA which made learning it quite easy for me.

How have you benefited from learning Arabic?
Through learning Arabic, I developed a much more thorough understanding of the Muslims and Arabs around the world, especially in the Middle East, as we speak. More importantly, I made friends with so many Arab people who are so generous and sincere, for which I feel truly grateful.

Would you say your learning experience has been easy or difficult, did you face any challenges?
I have always been really interested in foreign language learning, and it was thrilling for me to decide to learn a difficult language such as Modern Standard Arabic. With time, I found myself fluent in understanding and listening, however, there are some alphabets I found quite hard to pronounce precisely, and the grammar is no doubt the most difficult part.

Are you happy with your decision to learn Arabic?
I must say that I’m more than happy that I made the decision in the beginning to study Arabic.

In your opinion, what are the general benefits of learning Arabic as opposed to other common languages?
The unique strategic importance of the Middle East and the 22 Arab countries has already determined the superior position of Arabic than other foreign languages, not to mention that it is the mother tongue to numerous Arabs and the holy religious language to the Muslims in the world.

Do you advise people to learn Arabic? Why?
I do advise anyone who is interested in the language, the people, the culture or the region to study Arabic. The process of language learning and the sense of fulfillment when you make a good command of it will greatly surpass the arduous efforts you made. Arabic is such a fantastic language that you will never regret learning

Would you like to practice a local dialect with native people? How often you can travel to practice?
Absolutely! To interact with the locals is probably the most efficient way to learn the local dialect. I prefer to travel once a year and practice my Arabic in an Arab country, if I am able to do so. But I also would like to practice it online if possible, as this would be less expensive and more convenient for me.

How do you plan to use Arabic in the future? Are you planning on travelling to any Arab countries? Do you plan on working or investing there?
I plan to find a job relating to Arabic in Palestine, or to find a job in China related to Arabic, since the President of China raised the “One Belt and One Road” initiative which will ultimately strengthen the relationship between China and Arab countries.