The Local Dialect: Why you should be learning it 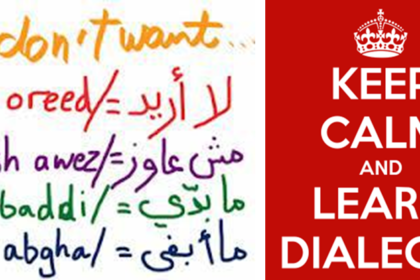 One of the most frequent questions among learners of Arabic, or those who are interested in learning the Arabic language,  is whether to learn the Modern Standard Arabic ( MSA)  or to learn an Arabic local dialect.

To help you make that choice , let’s explore both options.

If your intent is to learn Arabic for religious or strictly academic reasons then you might want to consider learning Modern Standard Arabic (MSA). However, if your motive for learning the Arabic language is to visit Arabic- speaking countries for business or tourism, or to make friends, or to get to know a new culture and converse with the locals, then you should definitely start learning the local dialect.

It’s true that locals do understand Modern Standard Arabic; however, you should be fully aware that they only use it when writing formally, and they DO NOT speak it. And so, if you are eager to interact and blend with the locals, then Modern standard Arabic is not your most useful choice, since people in Arabic- speaking countries do not speak Modern Standard Arabic in their everyday lives and daily conversations. What they do speak however, is their local dialect.

You should bear in mind that there are 22 Arabic- speaking countries in the Middle East region. This gives the Arabic language a beautiful quality; flexibility.  Flexibility makes Arabic an interesting and attractive  language. Having said all this, if you do decide to learn a local dialect , we recommend learning a central dialect. A central dialect is one that is spoken in more than one country and is easily understood by any Arabic speaker.  Geographically speaking, the most central region is the Levant. Levant countries have the most ‘central’ dialects, when compared to other countries of the region. These countries also exempt rich cultural and literary traditions that make travelling and living in in them a rich , rewarding and educational experience. For that reason, most Arabic learners who learn a local dialect choose to learn the central dialect of the Levant region.

Now you may be wondering: Which central local dialect should I learn?

For more information and more reasons on why you should start learning the Jordanian dialect, checkout out   https://www.shurfah.com

Shurfah is a Jordanian educational initiative that offers students who are interested in learning, or are already learning the Arabic language, two-way conversational skills in the central Jordanian dialect.